Battlefield Play4Free is an MMOFPS developed by EA Digital Illusions CE and Easy Studios, and published by EA. The game is apparently a modified version of Battlefield 2 and Battlefield: Bad Company 2, and makes me glad I never played Battlefield before Battlefield 3. However, I've heard BF2 and Bad Company 2 were actually pretty good. This just isn't a good representation of them. I personally really hate EA for various reasons, and this game isn't changing my mind. 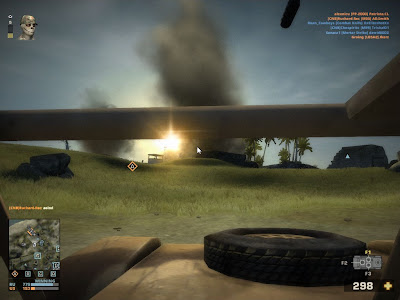 It is almost a standard Battlefield experience, with all of the annoyances that come with it, but butchered. Once you're done getting wow'd by all of the vehicles and jet fighters, you start to see the game for what it really is. Crap. As usual, however, let's first discuss what the game doesn't do badly...
RIGHT
Vehicles: Atmospheric
There aren't too many games that can't be vastly improved with vehicles, especially air vehicles. You can run slowly to a destination miles away, or you can jump into a tank and ride in style. Yet, while tanks are cool, helicopters and jets are what make Battlefield what it is. It's hard to beat that stunned feeling you get when you're rolling along and a helicopter just crashes into a building right in front of you.
What makes it cool is that those kinds of things tend to be scripted events in other games. When a jet fighter crashes into a mountain in Battlefield, though, you know there was actually another player that was in that jet that flew into that mountain. Not just some computer that was programmed to do that. When you climb into a helicopter and your pilot is good, you know it's a player that is actually good at piloting that helicopter. You aren't on rails, and that's what makes it amazing.

Size: Pretty Big
Bigger maps can hold up to 32 players. We are currently at a point in history where Planetside 2 exists, however, so this isn't really a big deal. I still think this deserves a mention, though.

Teamwork: Strategic
Battlefield Play4Free includes the well-known "spotting" system. It's a bit harder to do than in Battlefield 3, where it was default to only have to press Q once. In this game, you have to hold the button down and click on spotting in the Q menu. There is a fix for it, though.
Other than that, all of the classes have tools to help other teammates (I'll discuss classes in the next section). The medic can heal others, the engineer can repair vehicles, and any good pilot can help transport teammates to their destination. There is no benefit to leaving your team behind, so don't be like the many people who jump into a jeep and immediately drive off. Check the map and hang for a second in case someone wants to come with you. Of course, I'm sure I don't have to tell any of my readers about being a team player.

WRONG
Classes: Strict
This isn't to say that the classes themselves are bad or don't make sense (Note: I've only played Engineer). The problem is that you can't switch classes. When you start, and you have to start from the game's website to make your character and launch the game, you will be given a choice between four classes: Assault, Medic, Engineer, and Recon. When you choose a class, you're stuck with it unless you make a new character. This also means that you can't switch classes in-game. This can make gameplay a bit repetitive and stops you from evening out team compositions.

Skill Tree: Ugh
I'm really starting to wish skill trees would just disappear from all games outside of RPGs. They always imbalance the game and this takes it to a whole new level. How? Because you need skill points to unlock basic functionality that is taken for granted in every other shooter.

Here's a few examples (Note: This is the Engineer tree):
- Frag Grenade: You can't use grenades unless you have this skill.
- Grenade Combat Awareness: You can't see the grenade indicator unless you have this skill.
- Tactical Reflexes: You can't see the direction damage is coming from without this.
- Helicopter Piloting/Jet Pilot Training: Can't fly an air vehicle without these.
- Engineering Damage Assessment: Allows you to view current health of occupied vehicle.
- Grenade Toss-Back Combat Skill: Press E to toss nearby enemy grenades.

I'm hoping you see what the issue is here. You only get one skill point per level up. Now, imagine the amount of things you simply can't do when you first start the game. You can drive ground and water vehicles and are given a free license to get owned at every opportunity until you level up multiple times. And this is also a Battlefield game, which means you also start off with crappy guns. Enjoy.

Pay-to-Win Status: Positive
This was almost a hard decision to make, since everything that directly helps you can be gotten with normal in-game currency. But then I remembered I'm not an idiot.
Without a credits boost (and even with a credits boost), normal credit gain from matches is very slow for the prices in the shop. Being nice, let's assume an average of 60 credits per match. I go into the shop and check out the P90. Price advertised? 150 credits. Sweet, I have that much, let's b- oh. That's only to rent it for 1 day. A note says "In order to use and save this weapon with customizations, you need to buy it permanently." The price to buy it permanently? 17,500 credits. Seems legit. You now have the choice to either play that long or pay up $7.00 in cash and buy the weapon that way, which also allows you to ignore rank limits.
There is also a booster shop. However, unlike a normal booster shop which merely sells credit and exp boosters, this shop also sells defense boosters, which reduce damage from all sources, though it doesn't say by how much. Unlike the gun shop, though, the credit prices here aren't as lenient. There is an armor buff for the player and separate ones for every vehicle type, and an RPG damage boost, to name the most influential ones. The personal armor boost costs 2500 credits for 1 day of usage. The cheapest boosts are the vehicle armor boosts which cost 350 credits for 1 day of usage.
Do I need to go on, here? Sure they are attainable, but they aren't sustainable.

Respawns: I Must Have Missed Something
You are going to die, especially if you only just started the game. You will die frequently and consistently, and this is what you will see.

If I understand this correctly, the game doesn't load other players' customizations until you die, and then they do it while you're respawning. During this time, the game will start stuttering, making it harder for you to deploy in a different spot if you want to.
On that note, I'm wondering why there are only two places I can deploy at. "In battle" or "At Carrier/Base". When I'm on the winning team and we're controlling more points on the map, it would be nice to have more control over which point I'm spawning at. "In battle" is more than a little vague.

It was hard to get any real fun or satisfaction out of this game. You join, you die, you join again, you die again, and you keep doing that over and over again until you get powerful enough to feel guilty about how many noobs you're destroying with your skill tree. However, I can't say that the game is completely terrible. Vehicle combat is a cool thing to behold and parachuting out of a helicopter shortly before it crashes into a mob of enemy soldiers can be a nice experience. But since the game has a pay-to-win aspect to it, I do wonder why everyone who spends money on this game doesn't just go and play Battlefield 3.

Extra Things to Know
- Infinite sprint!
- You are given points for everything, so make sure to help teammates and fire at everything you see.
- Vehicles are made of tin foil. Avoid non-soldier obstacles.
- There is fall damage on water. Don't ask me why. I guess soldiers just aren't aerodynamic enough.
- There is a "Daily Draw" where you win a free prize every day when you log in. Can potentially give permanent items. Don't give in to gambler's fallacy, though. They let you pay cash to draw more than once per day.
- There are healing items, but they are consumable.