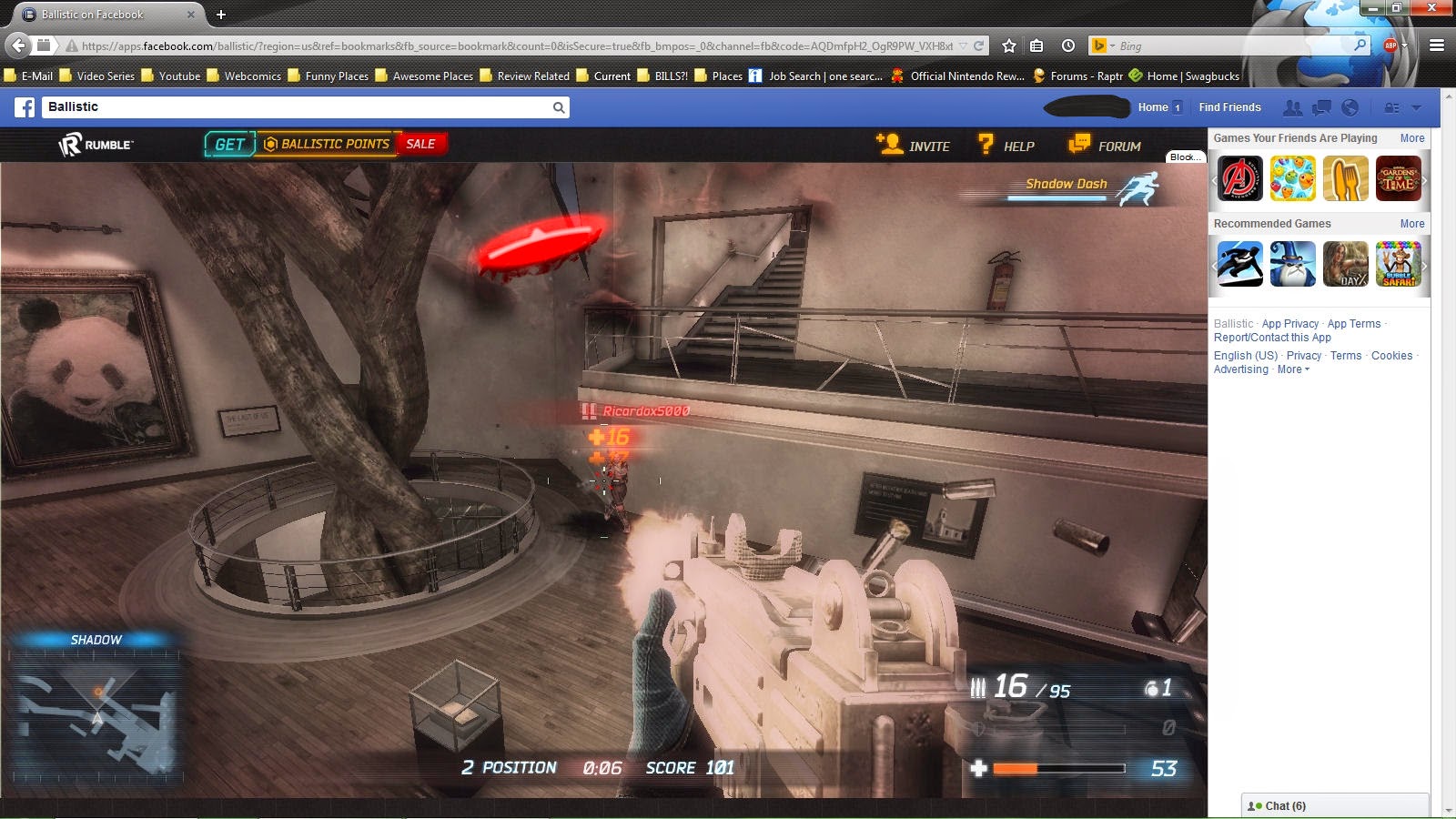 RIGHT
Graphics: Good
Everything looks and feels pretty nice. Guns are satisfying to use, there isn't too much or too little bobbing on the first-person view when moving or attacking. The environments seem to have had more work than usual put into them, since a lot of them seem to be based on real-world places.

Admire art, buy tuxedo, shoot a man in the face.

I was more than a little impressed by the level design, it alone being better than most online shooters on the market.

Rating: A Little Crazy
Instead of there being a separate ranked queue, you are constantly graded on your performance in normal matches. Your kill/death ratio, score, and whether you won or lost makes a Rating number go up or down each game. Increasing your rating puts you in progressively higher leagues to be matched with players of your skill level.
At least, that's what I think rating is for. Rating eventually starts fluctuating pretty wildly each game, but despite that your league level never goes down. The system may be improved at some point in the future.

Classes: Surprisingly Balanced
There are currently seven classes, but you only start off with one. The initial class is the Vanguard, followed by Shadow, Tank, Grenadier, Wraith, Marksman, and Berserker. Each class has varying base stats, such as health and speed, along with their own skill tree. 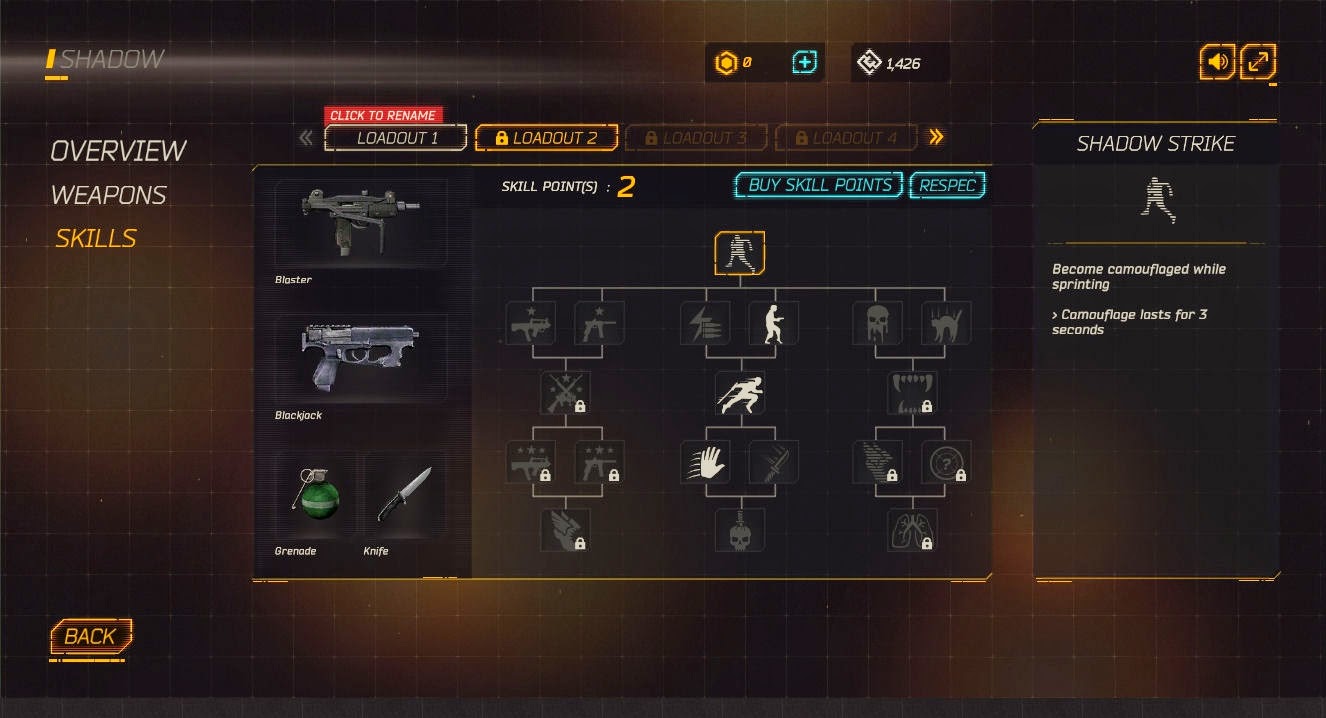 The skill tree is filled with passive effects that are either permanent or activate on certain actions, such as sprinting or taking damage. This means that players using higher level classes have a pretty steep advantage over newer players. However, the skill trees and class stats are balanced enough with each other to allow skill to win out overall.
Thankfully, the class you start with is just as good as other classes instead of being built to simply hold you over until you get something better. Vanguard is built as the most newb-friendly class, starting off with high health, health regeneration, and extra grenades near the top of his tree for more spamming. As you level him he becomes the class with the highest sustainability to the point where you may miss some of his upgrades, like the health regeneration, when you switch to another class.
Every class has an interesting buff that defines them, though. For example, Grenadiers can throw two grenades with one throw, Tanks have Last Stand (a perk popularized by Call of Duty), Shadows cloak while sprinting, etc. It all comes together to make the gameplay sufficiently dynamic.

WRONG
Pay-to-Win Status: Positive
While there are some weapons you need cash to obtain, none of them are as powerful as what you can obtain using credits (in-game currency). The reason I say this is pay-to-win is because of how slowly credits are gained. Each class costs 7500 credits to unlock, primary weapons cost as low as 3000 for weapons that don't matter or as much as 40,000 for weapons that break the game. You gain credits at a rate of 100-200 per match, plus 1000 credits per day as a log-in bonus. That doesn't sound too bad, right?
Well, there's also boosts. There are six boosts available, but two of them are just for experience and credit gains. The other four can be unlocked for 24 hours for 1000 credits, and each gives an extremely significant buff.

Titanium Rounds: Increases damage
Armor: Provides... armor (which takes 100% of the damage until it's depleted, so it's the same as health)
Stamina Boost: Double stamina (sprinting and jumping both use stamina)
UAV Drone: Shows all enemies on the radar every 3 seconds

All of the boosts can be stacked, and you likely won't be coming up with 4000 credits to spend on them every day. Meanwhile, cash lets you buy boosts out the wazoo, lets you level up classes without playing them, unlock weapons early, and use more loadouts. There's too many credit sinks for free players to compete with a cash user of equal skill. Though you should keep in mind the unnaturally low skill levels of most Facebook players.

Scoring: Maybe A Little Skewed
This is a smaller issue, but Ballistic gives out an exorbitant amount of points for killing sprees. This most heavily affects Free for All, where winning is based on points instead of kills. A basic kill grants 5 points, headshot or backstab is +2, revenge or savior is +5, but get 5 kills in a row? +60. This causes pretty big disparities in points, even among people with similar kill/death ratios.

Ballistic is worth a try just to explore the maps, but it's still a solid game outside of them. If you're willing to see past the light pay-to-win aspect and don't care about fighting good players, you may be able to lose yourself in this game next time you find yourself bored and on Facebook.

Extra Things to Know
- This game uses Unity
- Characters level 16 and above are banned from playing against players level 15 and below.
- There are occasional hackers
- Really low recoil on most weapons
- Backstabs with knives always instantly kill, regardless of armor or passives (except Last Stand)
- Shadows leave an after-image when go invisible, but it can't be seen from first-person
-  You can change classes while dead
- Classes get a minimum of 500 exp as long as you used them. Once you get multiple classes, be sure to switch around a lot
- Absolutely horrible language filter
- No room browser, can only do matchmaking
- You can still make a custom game to play the map and mode you want
- Max of 16 people in a match. 8 vs 8
- 4 game modes: TDM, FFA, KotH, and Capture Point