Robocraft is a tank shooter/creator developed and hosted by Freejam and available on Steam in Early Access. It is frequently described as "Minecraft meets World of Tanks", but it's probably best to ignore that reference, especially if you hold any ill-will towards those games. 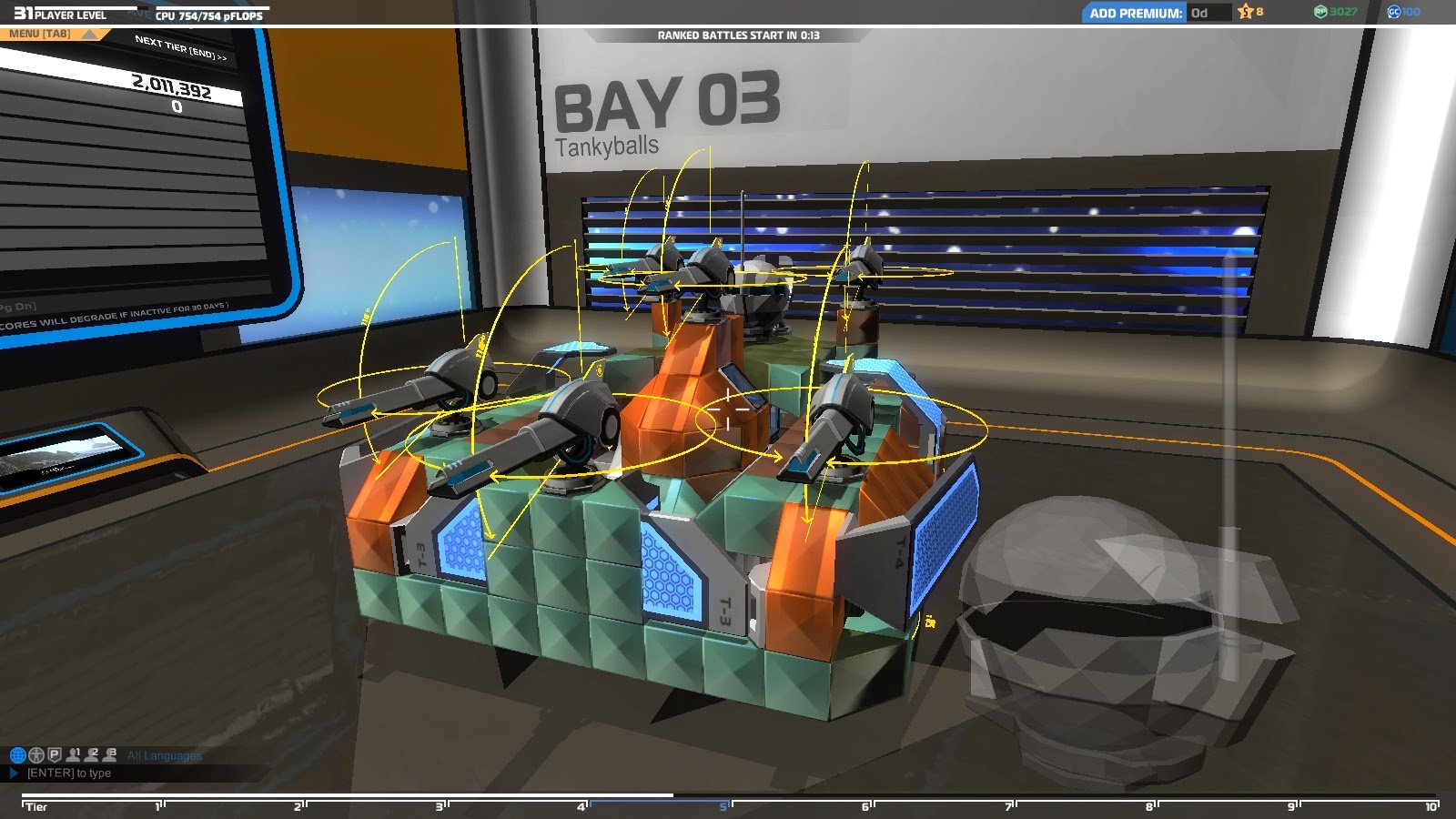 In this game you get a selection of blocks, the most basic blocks being free, and you build yourself a tank. How well your tank is built determines how well you do in battle, though there's nothing stopping you from just building whatever you want. Well, nothing besides the obvious. Parts need to be unlocked and bought, which takes time. Is it all worth it, though? Read on to find out.

RIGHT
Visuals: Impressive
Building a bot is cool enough, but watching it get deconstructed by enemy lasers is a spectacle. Each individual block you build with has its own properties and armor, and each will take damage individually. Getting shot will destroy your tank piece-by-piece, leaving you flailing around on one wheel or tipped over due to the shift of balance.

Somewhere on your vehicle you must place your pilot, and if your pilot dies then the whole tank explodes. Alternatively, all of your guns can be shot off which will effectively disable you and make you wish you exploded. It all comes together to provide a nice layer of strategy, where you will have to make split-second decisions of whether to aim for an enemy's guns or wheels, or to go for the quick kill by destroying their pilot.

Pay-to-Win Status: Questionable
All parts that affect gameplay can be gotten without paying cash. There is a VIP status you can purchase with cash that increases earnings, but that's it. The reason I say it's questionable is because of the tier system, which is explained in more detail in the other section. Robocraft lets you take higher-tier equipment into lower-tier games as long as your overall tier level remains low enough to enter.
This leads to the strategy of building an otherwise extremely weak vehicle but placing a weapon of much higher tier on top of it. In other words, go into tier 2 with a tier 5 gun, capable of instakilling everyone else in that match. People who pay cash can skip the normal way of advancing tiers, unlock a more powerful weapon, and then place it on their tank for free wins.
Of course, this only works up to a certain points since the max tier is 10. However, new players joining the game will have to get used to occasional instant death.

Waiting: None!
There is no respawning in Robocraft, but if you die you can just leave the game and still get your rewards. You can keep using the same machine, too, so there's no obstacle to your continuing enjoyment.

Options: Big Differences
As you play the game, more and more building options become available to you. You can build a large, tough, ground vehicle that shrugs off bullets as if they're made of rubber. You can build a fast, sleek hover vehicle that deals death regardless of the terrain. You can even build a flying vehicle to soar above the competition!

WRONG
Options: Maybe Too Big
And that's where the problems begin. Aircraft. Before I explain why this can be a bad thing, I should first explain some other topics:

- Tier System: Wonky
First, I should explain what exactly the "normal way" of advancing tiers is. Normally, in order to unlock the next tier of goodies you need to upgrade your vehicle to that tier, by unlocking wheels and weapons which can always be unlocked one tier below their respective tier on the tech tree.

You then play matches to get "Tech Points" (TP) for that specific tier, then use those points to unlock more gear and rise even higher. If you have cash, you can convert the TP for any tier into "Uber Points" which are capable of unlocking blocks regardless of your tier.

What makes it wonky is exactly how the different tiers of equipment types are set up. Higher tiers of normal blocks change colors, so you can't access a specific color of block until you unlock it. Higher tiers of "electroplates", which are used as shields (and strobe lights), change shape so a specific design can't be accessed until you unlock them.
Weapons increase in size, and you can't place blocks where they might clip into other blocks in most cases. As weapons get bigger, it forces you to build a bigger vehicle if you want to fit more weapons on your tank. Do you want to fit more weapons on your tank?

- Viability: Doesn't Go Well With Creativity
Yes. A common complaint about the community of Robocraft is that people lack creativity. Most people you see will be driving something similar to a box, kind of like my vehicle seen in the first screenshot. This isn't entirely about people being unimaginative or lazy, but more about the fact that this game doesn't reward creativity at all.
For you to get the max amount of dps out of any weapon, you must have at least six of them on your vehicle (keep in mind, you can only have one weapon type on your vehicle). This means smaller vehicles aren't viable. Disjointed or split vehicles don't work because parts can't just float in the air. If, for example, the block connecting a leg to your pilot gets destroyed, it annihilates that entire leg and anything on it.
At the end of the day, most people end up just building a brick because it's the most practical and easiest to place lots of guns on. Of course, this game is technically in Alpha, so this may improve with time.

- Weapons: Imbalanced
There are three weapons currently available: the SMG, the Plasma Launcher, and the Rail Cannon. Each has their own individual strengths and weaknesses; SMG is a short-range machine gun, Plasma is a mid-range mortar, Rail is long-range sniper rifle.
Because of the tier system, community whining is split between two of these weapons. Everyone in low-tier hates Rails and everyone in high-tier hates Plasmas. I will explain both.
In low-tier matches, vehicles are smaller and less armored. Even though railguns can't be unlocked until tier 4, you start fighting them in tier 2 because of how the tier system works. In most of these low-tier games, people using railguns can kill enemy players in 1-3 shots. This is far less effective in higher-tier games because boxes are built bigger and tougher. Plus, railguns have a ~20-second reload time. They charge up a certain number of shots, and once those shots are used you just have to wait it out. But then there's plasma launchers...

Options: Finishing This Topic
Plasma launchers work differently in that they aren't hitscan and all guns fire at the same time. Each shot does similar damage to railguns but without the railgun's reload time. On the ground they can be annoying, but the real trouble comes in the form of "bombers".
Machines soaring overhead and raining down death is a form that is very difficult to counter. They are, in fact, so high up that railguns would usually be the best way of dealing with them. However, as I said before, railguns become much less of a threat in higher tier games because of how much more heavily armored machines become. That includes aircraft. Bombers aren't frequently seen in lower-tier games because they get shot down too easily and most aircraft parts can't be unlocked until tier 5.

Basically, once you get to around tier 5, you trade one problem for another. These can potentially be countered with the right build, but it's up to you to figure it out and build it.

Victory: Be Very Careful
This matters a lot if you want your First Win of the Day bonus. If you die for any reason, Robocraft will not count the victory if your team wins. Staying to spectate makes no difference, dying at the end makes no difference. It's pretty strange.

While the premise of the game is great, it falls off on execution. You will have fun in your first few matches, but may become increasingly frustrated as you climb the ranks. Right now, there's a lot more emphasis on progression than there is on creativity, despite the advertising. Still, if you just want to have a fun and casual romp with some sort of giant dickmobile, you won't be disappointed. This game is best if not taken seriously, and worst if played competitively.

Extra Things to Know
- Starting at tier 5, it becomes possible for you to lose RP (in-game currency) from dying too quickly unless you have VIP. Before then, you are guaranteed to gain RP every match.
- This game has a pretty heavy grind for climbing tiers, worse if you're not a very good player.
- Friends Leaderboards were recently added. Get your friends to play and then lord your superior skills over them!
- You start with 100 GC (cash currency). It's pretty useless, but you can use it for repairs if you need the RP.
- There is no fall damage.
- Leveling up increases your "CPU" capacity, enabling you to stack more stuff.
- Your entire bot is linked to the block that your pilot is sitting on. If that block is destroyed, you die.
- First Win of the Day bonuses aren't shared. You can earn it for each vehicle in your possession.
- This game is in an Open Alpha Test! Many more features and upgrades will be implemented in time.