(Note: The game will be a bit prettier than it appears here. I have shadows turned off.)

Dead Island: Epidemic (or DI:E) is an action-MOBA and zombie-killing game developed by Stunlock Studios, published by Deep Silver, and currently in Closed Beta. It should be noted that the original Dead Island developers, Techland, stopped working on the series after Dead Island: Riptide. Stunlock Studios is the team responsible for Bloodline Champions. DI:E will be a very different game than what Dead Island fans will be used to and Stunlock's previous game never got too popular before fading into obscurity. Despite all this, DI:E is an interesting game and should attract a healthy amount of players. 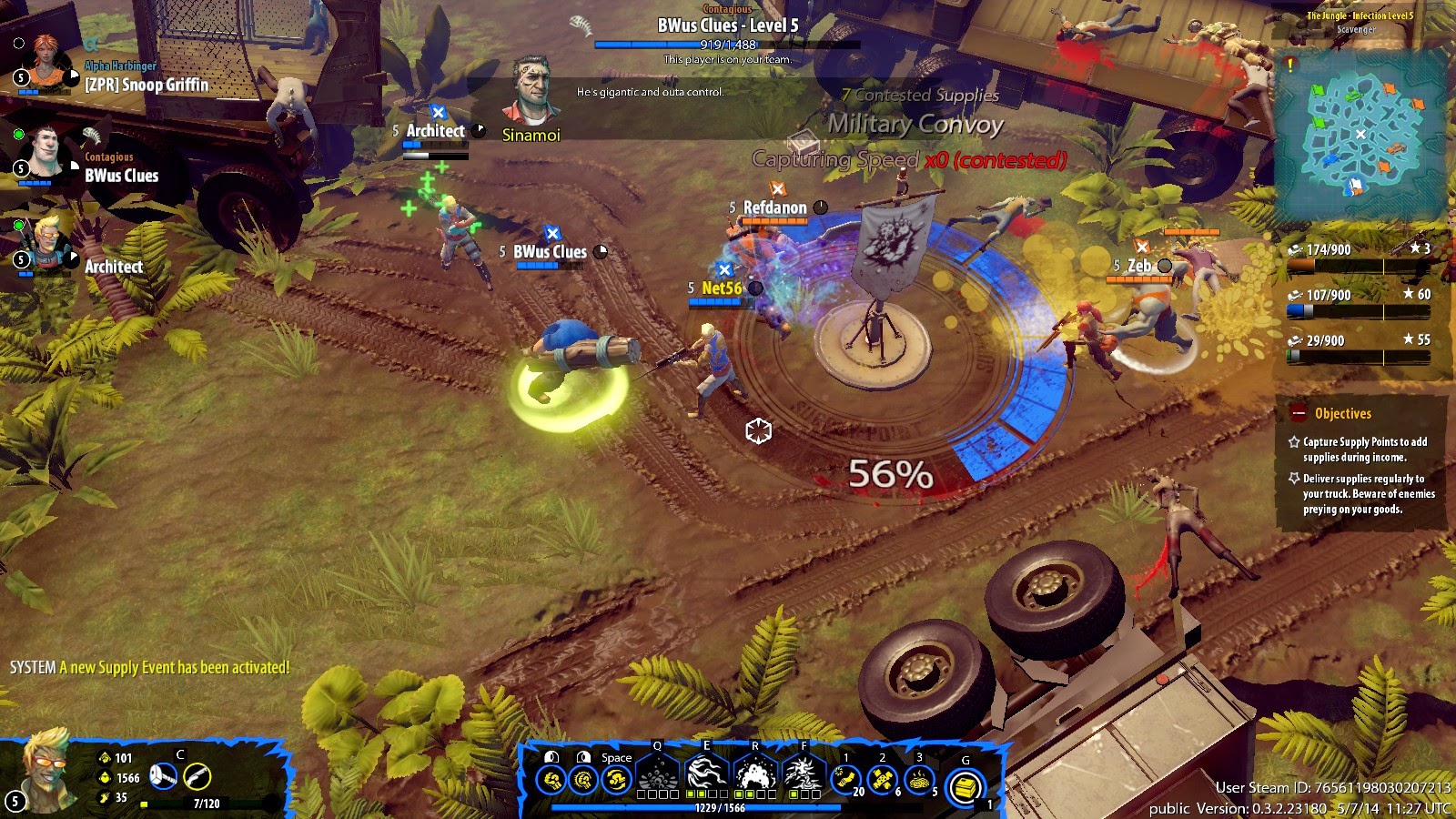 There are currently two modes. Horde Mode for killing zombies and trying to clear a map with the best time, and Scavenger Mode for PvP. What sets DI:E apart is that Scavenger is played with three teams, 4 vs. 4 vs. 4. Each team attempts to capture flags and collect supplies while stopping the other two teams from completing the same objective. Of course, zombies attack you during all of this, and zombies are neutral. Basically, imagine playing Left 4 Dead but the other survivors are trying to kill you, too. That is Dead Island: Epidemic. But let's discuss the deeper details...


RIGHT
4v4v4: Good Decision
Having three teams on the field helps to make the gameplay more dynamic. Try to focus on just one team and the team you ignore soars ahead. It makes every match different and causes significantly more drama, which is great entertainment. The drawback to this, of course, is that it becomes very dangerous to be the team in 1st place, as matches can quickly become 4v8. This is magnified by the way Scavenger works:

There are three ways to get supplies (which are your team's points). Killing zombies, capturing and holding control points, and killing a special zombie called a "Hoarder" which will drop an excessive amount of supplies on death. All supplies you pick up must be carried back to your team's truck to count. Any supplies you're carrying if you die are dropped on the ground. Hoarders and any player carrying over 50 supplies on them are shown on the minimap.
If your team is in first place, your team's color is more likely to be focused by the enemy teams, some of which may go so far as to camp your spawn. Then again, just stick together and know how to use the zombies to your advantage, right?

Not exactly. After a team has delivered enough supplies, nighttime comes and a message appears notifying everyone that the given team has filled their truck. During this time, special zombies are more likely to spawn, and trucks that are over the threshold are able to be looted. Yes, looted. You can expect the ends of about half of your Scavenger matches to be a mad dash to either steal from an enemy's truck or defend your own. Matches can be lost because of the 4v8 that ensues at the end of the game, as both teams come to raid you at the same time.

In my opinion, however, this just adds to the fun.

Controls: Different
Unlike most MOBAs, DI:E uses the WASD keys to move while the mouse is just used for attacking. Be aware that Smart Cast is not enabled by default, but can be turned on in the options menu.

Pay-to-Win Status: Negative
A lot of people enter the game and assume it's pay-to-win because there are weapons in the cash shop. However, this is simply pay-to-skip, and won't even come close to winning you the game. Buying cash weapons allows you to skip the account-level restriction and enter higher-tier matches earlier (explained in more detail further down the page). Cash weapons aren't actually any better than normal weapons and skipping to fight better players without having anything else just means your team will have to carry you.

Characters: Interesting
There are three types of characters in DI:E: "Survivor", "Armored", and "Mutated". According to the story, all of the characters are infected but instead of turning into zombies, they keep their brains and just get stronger. Survivor characters are their original forms, Armored characters keep their humanity and gear themselves up for zombie killing, and Mutated characters let the infection take over to grant them strange biological powers... for zombie killing.
While it doesn't make much sense, it does mean there are three versions of the original four characters. Separate versions haven't been made for the newer characters, but time will tell if they experience any changes, too.

Keep in mind that Armored and Mutated characters cost more to unlock than Survivors. However, they aren't actually better characters, they just play differently.

WRONG
Map Rotation: Random
This is a smaller issue. Scavenger has around 3 different maps and there's no way to choose a preference. Matchmaking picks a map at random for both Scavenger and Horde, so it doesn't matter if you like or dislike a certain map. This is worse for Horde, since there will likely a map you just don't want to play.

Horde Mode: Frustrating
And repetitive. In Horde Mode you are matched into a team of four and sent out to capture points on a small island. In other words, it's exactly what you're doing in Scavenger just without enemy teams. What makes it frustrating are the bosses, which are exclusive to Horde Mode.
Bosses are massive versions of special zombies. They have a lot of special attacks, AoE spells, and tons of health. Every boss has a gimmicky attack that is either hard or impossible to avoid and will usually kill at least one person. Reviving a player requires that nothing hit you for about 5 seconds, which will never happen. Luckily, the only penalty for having your team wiped out is a little wasted time and the boss healing a small amount of health.

Leveling: Slow
All weapons and characters level up individually. Eventually, though, you will want higher-tier weapons so you can fight better players. To get higher-tier weapons, you need craft them at the workbench. To craft them, you need to raise your workbench-level. Workbench-level is the same as your account-level. Account-level increases extremely slow. Why?
Because the max level is 6. Progress will be slow, but not too slow if you're used to the time taken to reach max level in other MOBAs. For example, it took me over 30 hours to reach level 6.

You will also want to keep an eye on character-level. All characters have a separate level outside of the game which unlocks the last two of their four skills, utility effects on their skills, and consumable slots. Players that have their characters and equipment leveled up higher will have an advantage, though matchmaking is supposed to balance that out. Extra skill effects aren't enabled in-game until the given skill is upgraded, so the beginning of a match will always be a bit more balanced than late.

Barricades: Annoying
Both Horde and Scavenger have high-health barricades your team must break through before the game can begin. Why? I don't know. Zombies will bum-rush you as you're breaking it down, making it more difficult. In Scavenger, being the first or second team to break through the barriers and get to the main area will grant you a temporary stat buff.

It basically adds a short time trial to the start of every Scavenger game, which seems unnecessary.

Pullers: Everyone Loves Smokers Right?
There are currently five different types of special zombies in the game: Butchers, Floaters, Screamers, Rams, and Pullers. All of these have Elite and Hoarder variants. Most of these are relatively harmless (except for Elite Butchers), but Pullers will often get you killed.
While they don't do much damage on their own, they grab you with their tongue and disable you for a very long time. I would estimate about 7 seconds. If you get grabbed and an enemy player sees it, and/or you're in the middle of a zombie horde, you are almost guaranteed to die. Attempting to get enemies hit by roaming zombies is always a good strategy, but Pullers are risky enough that players from opposing teams may call a temporary truce just to get it off the field.

Dead Island: Epidemic is a surprisingly good game, even if you disliked the Dead Island franchise. The danger of zombies combined with the danger of enemy players makes for a unique experience you won't find anywhere else. However, if you were looking for a purely PvE, zombie-killing experience, this may not be the game for you.

Extra Things to Know
- DI:E currently lacks character customization.
- Guns have infinite ammo
- You can set skills to upgrade automatically in the options menu, though I haven't tested it
- Attacking builds up a Rage bar. Right-clicking when it's full unleashes a more powerful attack.
- Dodge with the space key. Dodging gives a lot of invincible frames, but has a short cooldown. Use it wisely.
- You can carry up to three consumables on a properly leveled character. Try to drop the basic Bandages as soon as you can.
- Bound XP
- You earn a small amount of "Unbound XP" every match, which can be spent to level up anything except account-level.
- "Excess Bound XP" is earned by using things that are already at max level. This can only be turned into Unbound XP using cash.
- In-game currency used for buying characters is separate than the currency used for everything else. Items and weapons are gotten using Gear Points, characters are bought using Character Points. Both are gained just by playing, but Character Points are earned slower.
- Heroic Horde Mode is unlocked at account-level 4. I recommend against jumping right into it. It's pretty punishing.
- Each character has a melee and ranged proficiency, which is a % damage modifier to the type of damage. They also have weapon expertise, which grants them an extra passive when using a particular type of weapon.