Spirit Tales is an anime-style MMORPG published and hosted by KoramGame. It makes a point to be very cute and colorful and, as advertised, it succeeds at both.
Personally, I found Spirit Tales to be significantly more fun than most MMORPGs, as it lacks their slow speed and a bit of their repetition. It wasn't particular fun to play this game, but at the same time, it wasn't a chore. To get into specifics, let's check the right and wrong...

RIGHT
Replayability: High
The game features six different classes split between three tribes (the tribes don't really matter), each splitting into two different subclasses. Character creation is mostly just this, as besides hair style and color, there isn't much character customization at that point. The different classes all have separate skill trees, so it's worth it to play a few different characters to see how they control. There is no long boring tutorial to go through, so there's no problem with just starting over.

Pace: Fast
The game is pretty fast-paced compared to the average MMORPG. There is a nice movement speed, and the game isn't grind-heavy. Not only that, but everything from skills to potions has a remarkably low cooldown, to the point where you can spam anything you need to (the skills you start with have 1 second cooldowns, which is also the global cooldown, and potions have 5 second cooldowns). You're expected to spam skills so hard, that they let you put any two skills you want on the left and right mouse buttons, so you can spam just by clicking. Unlike other games, though, it hasn't increased enemy toughness to match the power of the player, so for most areas, the player is a bit overpowered. Though, note, the class I used when I played the game was Fighter, and I tried Sorcerer later on. There's always the possibility I just chose an overpowered class.
To set this game apart from other MMORPGs, at level 10 you gain the ability to shapeshift into a anthropomorphic animal form, increasing your abilities based on your class for a set period of time. 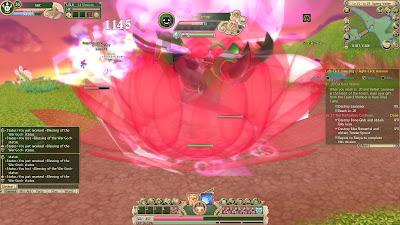 Much like everything else, the form also has a low cooldown, since the bar used to transform also fills up very fast when you spam skills. Not only that, but spamming skills while transformed lengthens the amount of time you can stay in that state.

Ease of Use: Present
Moving around is incredibly easy, and does not require you to constantly click on the screen, hold  a button down, or be at your computer. The game lets you click directly on the map and then auto-paths you to your destination. As it should be. With quests, you can click on the objective, and the game will automatically run you there, so for the most part you don't even need to look at the map. As is probably obvious by now, this game is very casual, but that's not necessarily a bad thing. There are semi-frequent respawn points which you can portal back to whenever you want (achieved by talking to a Medic), and you can save one point at a time. If you die, you can either respawn to the "Nearest" Medic or respawn at a "Bound" Medic, meaning the last Medic you checked in with. Luckily, Medics are placed outside of dungeons, which is very necessary since you can't respawn to the "Nearest" Medic when you are inside.
It's also worth mentioning that there is a Mutual Aid chat channel, where you are free to get help and ask questions about anything you want, and another player will respond. It's a bit like World chat in other games, but far more focused.

WRONG
Difficulty: Fluctuating
While the difficulty on the field is almost boringly easy, the difficulty inside of dungeons and instances rises dramatically. All monsters are hostile, and usually will attack you all at once. Even with the aforementioned potion spamming, trying to do these special dungeons alone will kill you. It gives something to work towards, and makes you care about your equipment and skills more, but if you're not prepared for it (meaning you ignored the chat the entire time you were playing), you can find yourself dead very easily, though the penalty for death isn't catastrophic.

Nothing else to say in terms of things this game does wrong. For the most part it's pretty average, and I regret to say I didn't have a chance to try out the 5v5 PvP.

The game wasn't particularly fun, but it wasn't bad. The casual nature of it's gameplay made it pretty relaxing, but getting destroyed when facing the first major boss was a real eye-opener. The game doesn't have anything missing from the experience, though the community is fairly small. The best thing about playing this game is making a party, going up to a boss, and then everyone transforming into a beast at once to take it down. But outside of that, you spend most of the game just instantly killing everything on the field, at absolutely no harm to you.
If you want a challenge, this is not the game for you. However, if you're just bored and want to burn time, then go and download it. You probably won't love it, but you definitely won't hate it.

Extra Things to Know (New Section)
- You can't get a free mount until lvl 40, though you can try buying one off of other players or getting one with cash or capsules.
- Most monsters don't drop any money when killed.
- You can craft anywhere you please, without having to go to a special NPC or building.
- Shapeshifting makes all monsters around you fly into the air. Spamming skills on them while they're up there let's you air juggle!
- You can tame most monsters on the field to have them fight for you as pets!
- Upgrading skills, and unbinding items both cost money (in-game currency).
- The cash shop sells more than just cosmetics. Makes the game even easier if you pay.
- You can change the color of the User Interface in the options.
- There is no penalty for dying inside of a dungeon (yay!), but dying outside of a dungeon is -10% durability to equipment and -5% of your experience.

Edited Thanks To: Luminescence