Dirty Bomb is a class-based FPS developed by Splash Damage, published by Nexon, and available on Steam. You take control of up to three dangerous mercenaries and try to complete objectives in spite of the enemy team. 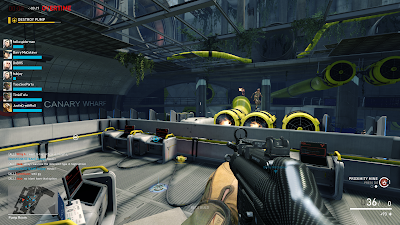 This game is very objective-based, meaning there is no deathmatch mode and your kill/death ratio isn't the most important thing in the world. Though you can probably act as if it is, since killing is essential and you're still going to lose if you can't do that. But hey, it doesn't all have to be mindless bloodshed, right? ...it does? Okay. Well, this game has that and more as you escort EVs, blow up pylons, and deliver... "objectives". However, let's delve into whether or not it's worth your time to do so.

RIGHT
Mobility: High
This isn't Unreal Tournament, but your movement speed is fairly fast and you're allowed wall-jumps and long-jumps if you want to get around faster. All maps involve several areas that can't be accessed without a simple wall-jump, adding some fun depth without increasing the difficulty. As a result, moving through most of the maps just feels right and flows very well. It also improves combat, as the significant boost in height from wall-jumping allows some cool moves that wouldn't be possible otherwise.

Pay-to-Win Status: Negative
This game comes close, since you may consider buying boosters and characters based entirely on how long it takes to get new stuff, and I'll touch on that further down the page. However, there isn't anything you can buy that directly helps you in-game. All you really need is a gun and good accuracy, so you can do well regardless of who you're using. Plus, the two characters you start with are really good!

Characters: Amusing
Dirty Bomb currently has 18 characters and every single one of them is a joy to play. Each has a selection of weapon loadouts, one or two special abilities, individual health and speed statistics, and are complete with voiced dialogue depending on what they're doing. For example, going "pew pew pew" when firing a turret, which is hilarious the first time you hear it and I apologize for spoiling it for you.

Character abilities range from satellite lasers and grenades to med-packs and sensors, making every class a unique gameplay experience. Want to slice a guy with a katana? Lay down proximity mines? Be that selfish bum who only revives himself? They're all there.

WRONG
Economy: Bad
...if you could play them. You only start with two characters: Aura, who can place a healing station, and Skyhammer, who can call down an airstrike. Everyone else must be bought using in-game credits, and can otherwise only be played when they pop up on the free rotation (allowing you to play the character for free for two weeks). The price for 11 out of 18 of the mercs is 50,000 (or $9.99), and the rest cost 30,000 (or $5.99). This is where the problem starts.
Normal credit gains for matches is abysmally low. The base credit reward for any given match outside of Ranked games is equal to 12 credits per minute played. Matches last an average of 15 minutes per match depending on the game mode, which is about 180 credits per game. Do some simple math and you know how long it would take to buy just one character at those rates. But don't fret! There are tons of bonuses you can take advantage of to get you credits much faster, which I'm going to make into a separate topic so it doesn't get lost in this block of text.

Long Play: Punished
There's a 500 credit bonus for your first win each day, a 500 credit bonus for each of the three game modes for playing them each day, and 3 missions that reward 500 to 1000 credits that refresh every three hours. This means that if you play the game at least once a day, and play a couple matches every three hours, you can make tons of credits without spending tons of time.
How is this a problem? This rewards playing the game in short bursts, but on the flipside it also punishes playing the game for longer stretches of time. Provided you're reasonably good at the game, all missions can be completed within half an hour or so. After that, everything is on cooldown so you're stuck earning that base 180 credits. Shooters like this aren't typically played in short bursts, so earning next to nothing just because you really like Dirty Bomb probably won't sit well with most people. Aside from that, the sheer amount of time it takes for you to get new characters means...

Imbalance: Yaaay...
The different mercenaries aren't too imbalanced with each other. I'm actually talking about the balance between players. This is a class-based shooter, and even though you can only bring three mercenaries into a match, it helps to have the full pick of the litter. This is especially true when it comes to player satisfaction, since nobody likes getting killed by a character they don't have access to. This becomes a serious topic on Dirty Bomb in particular, since some characters are just vastly better at killing than other characters, since that's what they're made to do. Characters such as Fragger, who has a grenade that he can bake, Rhino, who has a minigun, and Nader, who has a grenade launcher (and explodes when she dies), can be a serious thorn in your side when you start the game and they aren't available on the rotation that week. All you can do is shake it off.

This is actually a very fun game marred almost entirely by the slow progression. Ignore that, and the constant molotovs, grenades, and lasers that you can't use might not bother you quite so much. If you play the game in short bursts, or just have the patience to grind up to your favorite character(s), this game is definitely worth the download. However, if you're more of a binge player and you're not willing to shell out ten bucks, you might want to look around for other options.


Extra Things to Know
- You get a 20,000 credit bonus upon achieving level 5, so you can get one of the cheaper mercenaries relatively quickly.
- Some characters are "objective specialists". They can do things such as plant and defuse bombs twice as fast, so it's good to have one in your line-up and know who they are. They can easily win you the game if you let them.
- There's a 50% bonus to credits if you play Ranked, but no one plays Ranked.
- The tips in the loading screens are targeted towards the characters you actually play, which is a very nice touch. As a person who played Proxy 80% of the time for this review, I mostly saw tips for her.
- Each character has a set of Loadouts, including a primary weapon, a secondary, a melee, and three passive skills. The passive skills aren't on the base loadout card for any character; to get the maximum effect, you have to have the bronze loadout card. You can buy the specific card you want for 17,500 credits, but it's best if you just wait. You have a random chance of receiving a free equipment case containing a random loadout card as a match reward, and these cards can be fused to create cards of higher rarities. Just ignore that exorbitantly high price of 17,500 credits for a single loadout.
- Dying leaves behind a ghost of you, the guy who shot you, and a bullet line so you know what you got hit by. It looks pretty sweet, and gives a lot more context to that bonus screenie up there.