(Note: At the time of writing this article, Nosgoth has a very small population. Therefore, I couldn't play Siege mode because I couldn't find a match for it. Here's a Youtube video, courtesy of onrpg, showing Siege mode along with general Nosgoth gameplay.)

Nosgoth is a third-person action shooter game developed by Psyonix, published by Square Enix, available on Steam, and currently in Closed Beta. It has everything you could expect from a multiplayer spin-off of the Legacy of Kain franchise, and is every bit as serious. 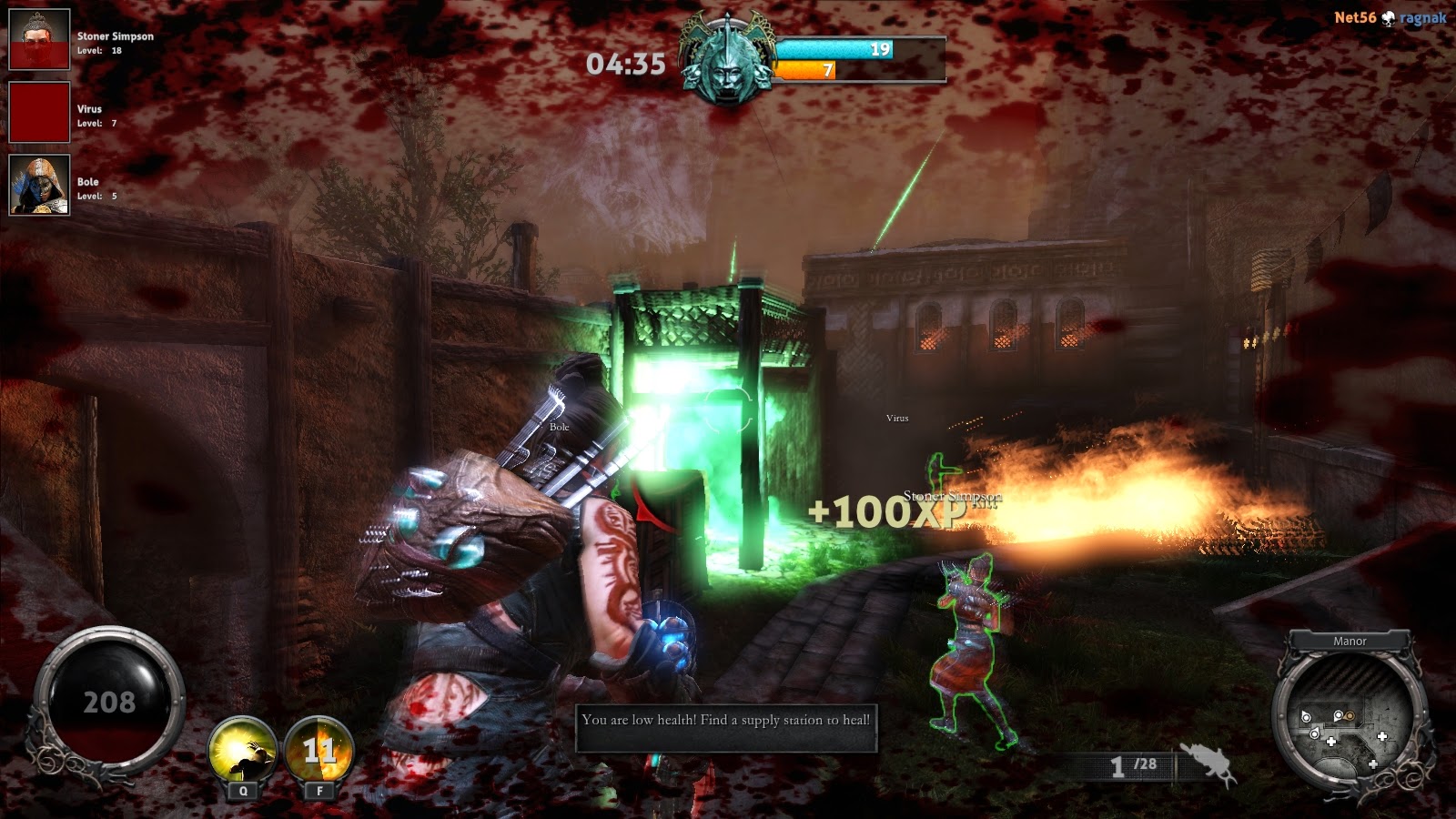 You are placed on one side of a war between humans and vampires for control of the land. Shoot down the vampires with cunning and teamwork, or crush the humans with brute strength and superpowers. You're going to have to learn how to do both, because you switch sides at half-time. Do you have what it takes? Are you willing to ruthlessly rip out a human's jugular directly after swearing to wipe the land of bloodsuckers? Try not to think about it too hard.

RIGHT
Graphics: Gory
Nosgoth has pretty great graphics for a free game. Environments do a great job of looking aged and war-torn, with blood splatters thrown around liberally as a testament to what happened there. Speaking of blood, prepare to see a lot of it. Blood splatters around the landscape as you fight, and literal streamers spew out as vampires drink their fill after a kill. Make sure you're not squeamish.

Classes: Done Well
Classes are continuously being added, but each side currently has four classes. Humans have Hunters, Alchemists, Scouts, and Prophets while vampires have Reavers, Tyrants, Sentinels, and Deceivers. Each of them has their own selection of skills and abilities, which can be swapped with alternate abilities available in the shop.
Besides class differences, the two factions also play differently. Humans have guns and the ability to sprint, while vampires can climb walls and have a chargeable, lunging melee attack. You may guess that vampires are more fun to play, and they are, but playing humans provides a nice adrenaline rush as you fend off the physically-superior hordes.

Pay-to-Win Status: Negative
Paying cash lets you advance faster, as always, but there's nothing that gives any advantage over players that just play the game. All characters and equipment is free, but there's a ton of skins and exp/gold boosts available for the man with cash, including some that increase gains for everyone else in any room you play in. Make sure to thank the players that buy those!

Lore: No Funny Business
Even though Nosgoth's relevance to the series is questionable, the developers have pledged to keep the game and everything added to it true to the lore. There won't be any silliness or funny business, even on character skins. While I don't personally care about this, I've heard that there are many that do. For those that do, hopefully you can give this game your blessings.

WRONG
Balance: Don't Be Discouraged
There's a high chance that vampires will be winning every round in most of your matches.

This is because vampires are extremely easy to play and their skills are set up to give them combos that enable them to easily kill any target in a one-on-one fight. Meanwhile, humans have to deal with the over-the-shoulder perspective taking up half their screens, high recoil on their guns, and having to rely on their teammates to help them if they get in a bind. There's also much more pressure to have good accuracy because landing a skillshot is more difficult than landing a fist, and if you miss you die. However, don't be discouraged; humans can win. You just have to stick together with your team and use better equipment (not that vampires can't do the same). But that brings me to the next issue...

Equipment: Imbalanced
You should switch out at least two of the things on every character because the default gear on every class is merely okay. They are enough to get by, enough to win if used correctly, but you can do better. A hefty amount of the alternate abilities in the game are directly better than the default skills. The gameplay favors damage and, as much as I hate to say this, any skill that does damage is an upgrade from any ability that does zero.
Most alternate skills try to have some sort of drawback to balance themselves out with the other abilities, but completely fail to actually do so. A select few are a bit more obvious than others. Specifically, a skill called Pounce.

Pounce is a Reaver skill that lets them do an aim-assisted jump onto humans, doing a significant amount of damage (~400 damage on a game where most classes have ~1000 health), while simultaneously incapacitating the target for the duration of the skill unless you get knocked off by their teammates. But then, there's Savage Pounce. Savage Pounce adds ~200 more damage to the skill, but takes off the aim-assist. That's it.

Despite balance issues, it's actually a really good game. It gets better as you level up, get better gear, and unlock new things so even if you lose a lot at the beginning, keep trying. It's not as hopeless as it seems. It's primarily just missing features right now, but more is sure to be added as the game develops. If you're looking for a good, gothic shooter or are a fan of the Legacy of Kain series, you're sure to have fun with this one. Get your crossbow and bloodlust ready for it's eventual release!

Extra Things to Know
- Important: You can unlock a new character every 5 levels, you can't directly buy characters without cash. Characters level-up, too, and receive a free permanent item every 5 of their levels.
- The two sides heal differently. Vampires can regenerate a small portion of their health, but can only fully heal by killing and feeding off a human. Humans can't regenerate, but can heal themselves at any of the various shrines peppered throughout the map.
- A server-browser is said to be in the works, so you won't always have to rely on matchmaking.
- As I said before, blue team is always vampires. Make sure you're looking at the right score!
- You can queue up in New Recruit for a Team Deathmatch with other newbs like you. Once you hit level 10, you're banned from New Recruit.
- However, at level 10, you also unlock access to Siege Mode. Hopefully the level limit for Siege will be lowered in the future.
- There is no jump. Vampires can do a ledge-jump if you hold shift as you run off.