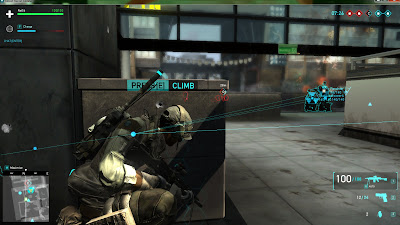 RIGHT
Class Balance: Done Right
The 3 aforementioned classes—Recon, Sniper, and Assault—are very balanced with each other, to a surprising degree. There is no "best class" to choose, and each has their role on the field. What's interesting about the balance in this game in particular is each class's special abilities. Each class is given two (one equipped at a time), for a total of six different abilities. Proper use of these abilities completely changes the flow of battle, but at the same time they aren't unstoppable. Every ability is directly countered not only by good tactics, but also several other abilities. They're also all saddled with long cooldowns, which stops them from going out of control and having the game completely revolve around them. With proper class balance and proper ability balance, this game already sets itself apart from most shooters on the free-to-play market.

Controls: Amazing
The controls in Ghost Recon Online are a cut above most, as they actually contribute to the game's immersion. Besides basic movement, you are able to sprint, crouch, go prone, and do an awesome combat slide into cover.

Cover provides a bonus to accuracy, stability, and recoil, so it's very beneficial to be attached to a wall whenever possible. If you haven't already guessed, you'll be spending a large amount of your play time hiding behind something, as this isn't a twitch shooter. Luckily, the controls feel natural enough to make you feel as if you're in the game yourself. Or, at least, a more hardcore version of yourself.

Gameplay: Tactical
The 2 game modes—Conquest and Onslaught—both revolve around capturing or defending an objective, and then proceeding to push the enemy back. Most of the time, you won't be able to just rush into battle, guns blazing, so you'll have to take it slow. Very slow. Check every corner, watch your back for flanks and, most importantly, keep your team informed. The game encourages communication and even has voice chat enabled. If you choose to just run blindly into enemy fire, this happens:

Despite how strict this sounds, the learning curve isn't that steep, and it won't take more than a couple of hours to get the hang of things. Not only that, but the game comes packaged with a nice sense of accomplishment once you do.

Grenades: Not Spammed
Like most shooters, every time you respawn you are resupplied with two grenades. Unlike most shooters, you must buy your own grenades. Not in the more traditional sense of buying a type of grenade and then just using that infinitely. You must buy every grenade (they come in packs of five), and once they run out, you simply can't use any grenades. Personally, I like this idea. It has resulted in much less grenade spamming than what you would see in many other games, and there's more incentive to make every grenade count instead of just throwing them randomly.

WRONG
Criticals: I Don't Even Know
As you may have noticed from the above screenshot, this game uses damage numbers and records the exact locations of the last seven or so bullets or other attacks that damaged you. What you don't know is that this game features the critical hit mechanic, which is usually used in RPGs. A critical hit does double the damage of a normal hit and registers as a red number instead of a yellow one, for verification. While I personally don't mind the critical hit mechanic in shooters, it is a problem for it to appear on certain guns, particularly sniper rifles. Normally, a sniper rifle wouldn't kill you in one shot unless it was a headshot, however...

Along with this, there's also "weapon proficiency", which makes it so the longer you use a weapon, the higher the critical chance is. Not only that, but aiming down the sights also increases the critical chance. Put those together and you get a lot of frustrating moments...

Recons: Mind Them
...and speaking of frustrating moments, I think it's necessary that we discuss the Recon class. A surprisingly large amount of new players on the game tend to rage and quit while complaining that Recons are overpowered, and I'm pretty confident that there are two specific reasons why.
The first is their Cloaking ability, which makes it easier for them to get around the field and flank, and the fact that they can fire while cloaked. Shooting cancels the cloak, but the first couple shots will land before the cloak comes off and the enemy realizes you're there. While cloaking doesn't make you totally invisible, it can be very hard for most people to see.
The second is that Recons can be snipers and Ghost Recon Online seems to have taken all of zero steps to nerf snipers in any way. Be prepared to get sniped very often, especially when you first start the game and aren't well-versed on how to deal with them.
This isn't to say Recons are actually overpowered, as they aren't. But given the amount of complaining regularly directed towards that class, I think it's only fair to warn you. They WILL tick you off.

Character Customization: Very Low At Present
At the time of writing this review, there aren't a lot of customization options in terms of making you look different from everyone else.

That's it. That's all the customization there is currently. 7 faces and 7 skin colors. I'm sure they will add more, since the game is currently in open beta, but you do have to marvel at the selection.

Prices: Absurd
Unlike usual, I'm not talking about in-game currency (RP) prices. Although a bit high, all equipment in the game is permanent and nothing ever needs repairing, which means all money you earn, you keep. The only things that don't stay are "consumables", meaning grenades and "armor inserts", which provide a small buff when...inserted...into armor. If you just stick with a single class, you're fine.
No, strangely enough the problem here is the CASH prices. While they start low, same with RP prices, they ramp up to a crazy degree.


Starting off with the fact that 7830 "Ghost Coins" costs 50 bucks, let's check out some of the higher prices for guns...
For a max level LMG, it would cost a little over 50 dollars to purchase with cash. I can't be the only one who sees a problem with this. I don't see anyone spending that kind of money on virtual guns.

Server Browser: Does Not Exist
This game has no server browser, which means you will have to rely on matchmaking to get a game for you. While mildly annoying all on it's own, this game also has no post-game room to finish whatever flame war you were having with your enemies by the time the match ended. This means that setting up a rematch or forming a party with past teammates is somewhat more difficult. Parties (called "fireteams") can be set up in the lobby, and directly before a match starts, but not afterwards. Why not?

Friendly Fire: Only on Grenades
For some reason, there is only friendly fire (meaning you can damage your teammates) on grenades, and not guns. It helps as another reason not to randomly spam grenades as you can in other games, but I do wonder if it's necessary. Particularly since they're grenades, and a badly-thrown grenade can end up wiping out half your team at once. It seems strange that it's in there at all.

While Ghost Recon Online has it's faults, most of them aren't really gameplay related. While in a match, the game seems almost magical in it's console-quality gameplay and sleek user interface. It's only once you get sniped in the face and level up a bit more that the rainbows start to peel away. Regardless, what the game does, it does very well, and I would encourage everyone to flock over to it. All you have to do is ask yourself whether or not the strict tactical shooter is right for you.

Extra Things to Know
- As said before, just focus on one class. There isn't enough RP to spread between more.
- Classes don't share levels. When you level up, you leveled only that class.
- You can roll grenades by right-clicking instead of left-clicking.
- There is a First Victory of the Day RP bonus.
- Despite spending most of the game hiding behind things, health regeneration is extremely slow and not to be relied on.
- You have a tiny chance to win loot at the end of every game. Rumor has it that if you do better, your chances at getting loot are higher!
- Unlike other class-based shooters, you can NOT change your class mid-match. Only equipment.
- Sprint is infinite, but keep in mind that Sprint is toggle at default. This can be changed in the controls menu in options.
- Weapons are mildly customizable.
- There is damage fall-off over distance, most noticeable with pistols and shotguns.